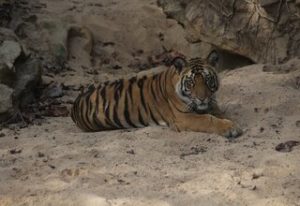 Sanjay Dubri is located in the north eastern corner of the state of Madhya Pradesh in the ditricts of Sidhi & Shahdol over an area of 1674.511 sq.km. The core comprises of Dubri Sanctuary and Sanjay National Park, while buffer area includes the area of Sidhi & Shahdol disticts. Gurughasidas National Park Forms the southern boundary of the reserve. While Dubri Sanctuary is located in plains, the National Park is full of undulating hills and some plateaus. The eastern & western boundaries of the Reserve are formed by Gopad & Banas rivers respectively, which flow into river Son and become part of Son Gharial Sanctuary, where critically endangered gharials breed in wild. Bagdara Sanctuary is located in North Eastern side of Son and lies in Singrauli District.